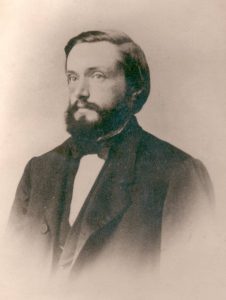 The founding father of the observatory was Dr. Karl Remeis(Sept. 9, 1837 – May 25, 1882), a wealthy lawyer and amateur astronomer from Bamberg. He received his doctorate from the faculty of law of the University of Erlangen-Nuremberg on December 21, 1863 (“Die Wiederaufnahme im Strafverfahren.” – Erlangen: Deichert, 1864), and worked at the district court in Bamberg until 1873. Following the death of his mother, he went to Italy to pursue his studies on Natural Sciences. 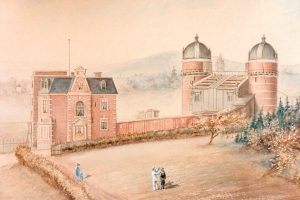 Drawing of the first building of the Dr. Karl Remeis Observatory

The observatory consists of a main building and an observation building with a meridian hall and two domes in an eastern-to-western direction. Both buildings are connected with a corridor, which is used as an exhibition site for historical documents and instruments today. Additionally, there is an annex built in 1860, which hosted the mechanical workshop until 2007. 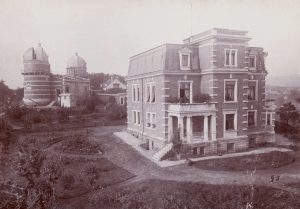 The western dome was equipped with a 10″ refractor telescope, the eastern dome with a heliometer. This instrument can be seen in the Deutsches Museum in Munich. For more than 70 years, the main research topics were the observation of variable stars as well as the systematic monitoring of the northern hemisphere together with the observatories in Babelsberg and Potsdam. After the end of the Bamberg survey in 1962, the monitoring was extended to the southern hemisphere. With the help of the Deutsche Forschungsgemeinschaft, the scientists of the Dr. Karl Remeis-Observatory maintained an outstation at the Boyden Observatory in South Africa. The yield of about 40,000 photographic plates is complete extant. The photographic plate archive is located in the old workshop.

The Northern sky was monitored from 1926 to 1939 in Bamberg, whereas monitoring the Southern Sky was carried out between 1962 and 1976 from Boyden Observatory (South Africa), Mount John (New Zeeland) and San Miguel Observatory (Argentina).

Mollweide diagrams of Bamberg plates in the data releases: