The APPLAUSE Data Release 3 (DR3) is the third release of digitized photographic plates, along with metadata about the plates, digitized observation logbooks, and data extracted from images.

The majority of extracted sources have their positions (right ascension and declination) calibrated with the help of the Tycho-2 and UCAC4 catalogues. The database contains 2.065 billion sources with matched UCAC4 designations, 1.179 billion APASS DR9 matches and 367 million sources with Tycho-2 designations.

Extracted sources have their magnitudes calibrated, using the APASS DR9 and Tycho-2 catalogues as reference. The calibrated magnitudes together with observation times form light curves that can be extracted from the database.

The following sky coverage plots show the distribution of extracted sources in the sky. It can be seen that Southern sky is covered more evenly, thanks to the Bamberg Southern sky patrol project. 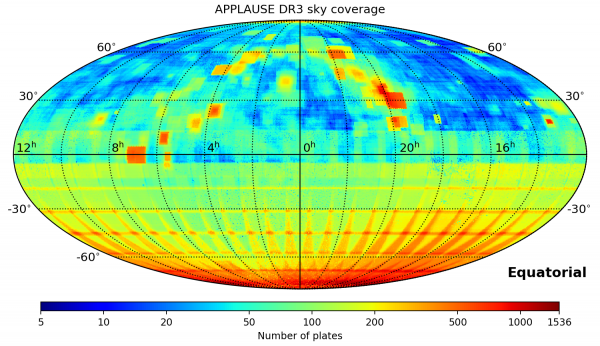 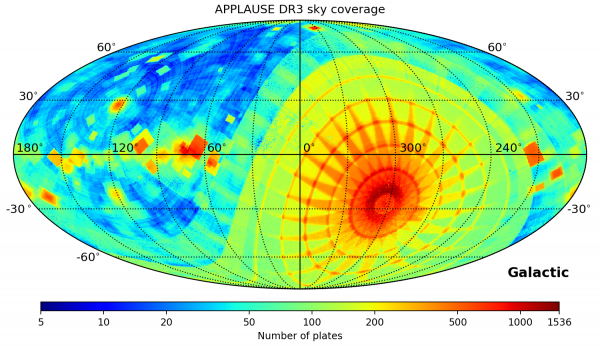 Time coverage is illustrated in the following figure. The oldest scanned plate in DR3 is from 1893, belonging to the Potsdam Carte du Ciel archive. The youngest plate is from 1998, obtained with the ESO 1-metre Schmidt telescope at La Silla, Chile. 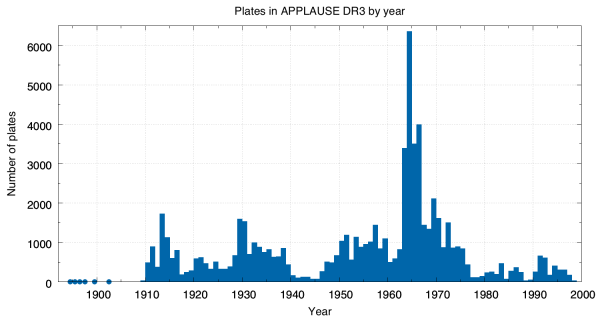 Mollweide field-of-view plots of plates in the APPLAUSE DR3 archives are found here: Archives of DR3
Please be aware that we have reassigned a number of plates to different archives, because a closer study of the metadata suggested this.
The most obvious reassignment is the DR2 archive 201 (Bamberg Southern Sky Patrol), which was split into three archives in DR3 to clarify that the observations took place in different locations. Plates with archive_id 203 were observed in South Africa, those with archive_id 204 are from New Zealand, and finally those with archive_id 205 were observed in Argentina.
The archives are build on extended metadata, especially we wanted to easily distinguish between location and telescopes and instruments, the latter two sometimes completely taken to other locations.

Plate scans and metadata were processed with PyPlate version 3.0 (subversions 3.0.0 through 3.0.5).