The following images illustrate that 99.92% of the sky is covered by plates in DR2. The most observed region is located in the constellation Cygnus, with a total number of 1093 plates. Areas with no data are shown in grey. 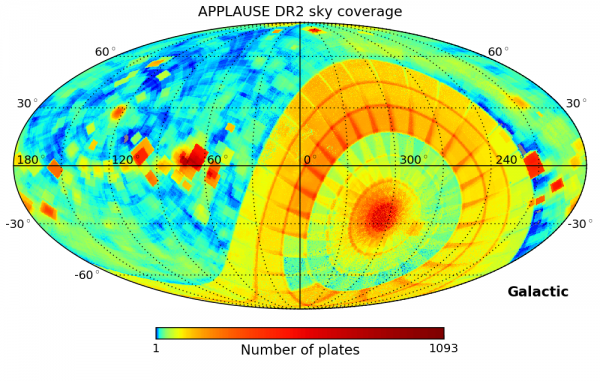 Raw magnitudes and fluxes have been extracted from scans by the SExtractor software. Magnitudes have been calibrated using the UCAC4 and Tycho-2 catalogues. From UCAC4, which contains photometry from the APASS DR6, we have used B and V magnitudes for stars fainter than the 10th magnitude: B > 10 and V > 10. Brighter calibration stars have been taken from Tycho-2, transforming the BT and VT magnitudes into B and V.

Plate scans and metadata were processed with PyPlate version 2.0 (subversions 2.0.0 through 2.0.7).

The data processing workflow that was used to prepare DR2, except the photometric calibration, is described in the following conference paper:

Please refer to the contents of APPLAUSE DR2 for more details on what is included in the data release.