Welcome to the APPLAUSE archives 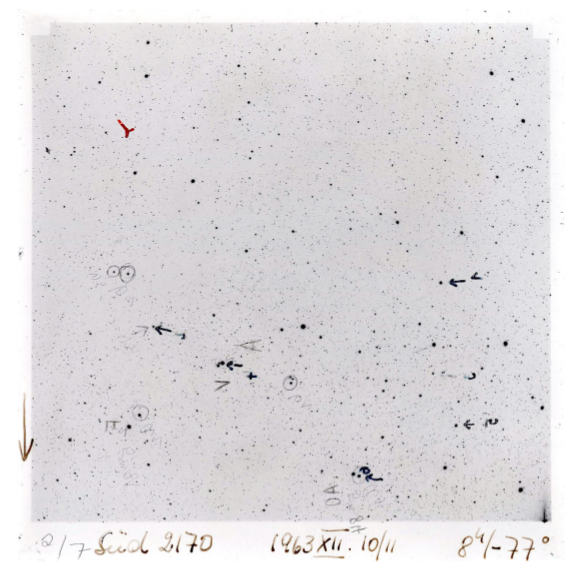 Example of a photographic plate. More sample images can be found in the image gallery. Access to all image material is also provided by the viewer

German astronomical observatories own considerable collection of photographic plates. While these observations lead to significant discoveries in the past, they are also of interest for scientists today and in the future. In particular, for the study of long-term variability of many types of stars, these measurements are of immense scientific value.

There are about 85000 plates in the archives of Hamburger Sternwarte, Dr. Karl Remeis-Sternwarte Bamberg, and Leibniz-Institut für Astrophysik Potsdam (AIP). The plates are digitized with high-resolution flatbed scanners. In addition, the corresponding plate envelopes and observation logbooks are digitized, and further metadata are entered into the database. The work is carried out within the project "Digitalisierung astronomischer Fotoplatten und ihre Integration in das internationale Virtual Observatory", which is funded by the DFG.

On this site, you can get access to the plate data that are processed so far. Please use the registration form to get a user account. Then you can submit SQL queries or fill search forms using the query interface. Without signing in, the query interface can be used as a guest user.

The APPLAUSE Data Release 4 (DR4) is the fourth release of archives of digitized photographic plates, along with metadata about scientific content the plates, digitized observation logbooks, and table data extracted from the images.

The majority of extracted sources have their positions (right ascension and declination) calibrated with the help of Gaia EDR3 catalogue. Since EDR3 is the current astrometric catalog with the most precision and coverage, it is the reference catalog for most astrometry matching.

A classification - based on machine learning - of all source detections provides a likelihood for distinguishing between objects and artifacts.

Extracted source detections have their magnitudes calibrated, using the Gaia EDR3 catalogues as reference. The calibrated magnitudes together with observation times form light curves that can be extracted from the database.

The following sky coverage plots show the distribution of extracted source detections in the sky. It can be seen that with the addition of the Northern Sky catalog from Bamberg, the whole sky is covered more evenly (compared to DR3 of APPLAUSE), there are now even more observations from the Northern sky.

Time coverage is illustrated in the following figure. The oldest scanned plate in DR4 is from 1893, belonging to the Potsdam Carte du Ciel archive. The youngest plate is from 1998, obtained with the ESO 1-metre Schmidt telescope at La Silla, Chile.

If you make use of the APPLAUSE data please cite the the appropriate acknowledgements for the various data releases: